Stephen Sizer, a blogging Reverend who espouses anti-Judaic theology, who associates with Holocaust deniers and antisemites, and consequently who I’m not going to link to, managed to persuade the police to pay a visit to one of his blogging political opponents, Seismic Shock, as he relates on Engage.

The Sarge made it clear that it was an “informal chat” but the Reverend has suggested otherwise:

You must take a little more care who you brand as anti-semitic otherwise you too will be receiving a caution from the police as the young former student of Leeds did recently. One more reference to me and you will be reported.

To echo the incongruous but rousing cry of another opponent of free speech, Michael Cushman: “We will not be intimidated!”

Read Alec on Stephen Sizer’s recommendations for preaching about blogging. They don’t reflect well on the author. Read also Modernity on why it is important to respond in this way to intimidatory attempts at censorship. Rosie probes around the policing.

Barkingside is a place for all seasons. Here’s what’s going on in Claybury Park today. When you think of Essex you don’t think of hills  but this one (Hospital Hill, I think it’s called but B21 may correct me) gives views across the West End, City, Docklands and even to the Dartford Crossing. Oh, and you can also see all the slummy bits of board and plastic discarded by badly-reared children.

Despite the bloodcurdling screeches and near-collision with me at the end, nobody was hurt in the making of this video.

To my sorrow, I have never tobogganed – or even bumboarded.

Bob directs his readers to Keith Kahn Harris’ attempts to persuade fighting Jews to cool it, which reminded me of David Newman dismissing Jewish fears of antisemitism. Engage refers us to the story of a surgeon’s abuse at the hands of anti-Zionist boycotters within his profession.

Politically Newman and Kahn Harris are both good blokes in the grand scheme of things – not antisemitic, not abusive, not Israel-eliminationist. You can see, my standards are quite low for this particular ‘debate’ (or vicious fight). So I’ll give them some attention anyway, because I don’t think British debates about Israel are really about the Palestinians – the Palestinians are just a pretext for an entirely inappropriate, futile but nasty attack nobody should take at face value. And I don’t believe concerns about how the Jewish community comports itself should inhibit anybody from lashing out or otherwise manoeuvring in response to racism. The issues I have are that, when examining ‘debates’  between anti-Zionists and their targets, I don’t think it is appropriate, as David Newman does so comfortably, to position yourself somewhere in remote distance and pronounce. Nor as Keith Kahn Harris does, to draw moral equivalences between aggressor and aggressed, as if there has been some kind of misunderstanding which can be assuaged by dedicating oneself to accommodating your adversary.

For example, who maintained a singular campaign to exclude Israel, alone out of all the world’s occupying or repressive states, and then when Jews resisted this hosted debates with references to Zionists which map neatly onto references to Jews in the run-up to the holocaust, used Jew, Zionist and Israeli interchangeably and invited antisemitic campaigners onto their platforms, and then neutered or voted down motions to address antisemitism? The University and College Union. The Green Party. Others. Within The Green Party and UCU anti-Zionists are the only ones seeking special treatment for Israel. Nobody is seeking positive treatment for Israel.

Who, because he doesn’t hate Israel, persecuted this senior surgeon to the point of breaking down and retreating? He didn’t seek special treatment for Israel or Jews – anti-Zionist boycotters did.

The anti-Zionist front groups Jews for Justice for Palestinians and Physicians for Human Rights Israel, and an energetic persecuter called Dr Derek Summerfield are culpable, not their targets who as far as I can see are responding with words and arguments, not with counter-exclusions.

It’s a testimony to latent antisemitism that these futile and marginal campaigners can get so much done within their organisations. Racism attaches to so much of the so-called ‘debate’ and campaigning about Israel, and when it is inadvertant it’s even more alarming.

“A grown man breaking down in tears just because some doctors have been mean to him. If we did that, we would be taken straight to the GMC loony bin, locked up, fed bagels by our Jewish GMC Chair Count Rubin and forced to repent. Whistleblowers are sinners you see.”

Declared Conflict of Interest – Avid Fan of Fiddler on the Roof, Continuously buy cakes from jewish bakeries. Always amazed by the length of jewish noses. Represented in the past by a jewish bagel eating barrister Robert Jay QC.”

Clearly this is a person who loves Jews. And talking – Rita’s words – of how Baum “pissed the world off”, Keith Kahn Harris should approve – he encourages Jews to think of themselves a troublemakers. But Baum got pounded out of that medical role. One commenter, Dr Liz Miller (my word, she says she’s MIND Mental Health Champion) is ROFL at the news of Baum’s breakdown. I guess this will be one of the many exceptions which tend to complicate KKH’s arguments.

The anti-Zionist boycotters are fighting a self-serving proxy war. Those who turn viciously on members of their own organisations (for example, Michael Cushman of UCU, the Green Party’s Green Left, and Derek Summerfield of the British Medical Association) are the only ones who can end this fighting, and they are satisfied for it to continue. So it will.

Keith Kahn Harris seems not to understand this. He doesn’t mention Professors Baum or Yachar by name in his broad and general analyses of the Jewish scene. It is the comportment of the Jewish community in wider society which primarily concerns him. The thrust of what he argues suggests that he’s encouraging angry, fearful, even tearful, people to turn the other cheek and chalk the hurt up to debate. I strongly disagree. It’s right to demand more of the original aggressors than you demand of the targets of the aggression.

I came across a kind of community pride I prefer when Anthony Julius, perhaps in conversation at Jewish Book Week, urged Jews and Israelis to assert and assume their place in the world, despite the slanders against them.

An alternative view which I find pretty convincing – Gideon from Simply Jews commenting on the Engage piece I linked above.  He notes the General Medical Council’s coward’s boycott of Israelis, and Israelis’ self-boycott of British medical collaborations. He is content with this, seeing it as a British, rather than Israeli, disadvantage and only a simple act of reciprocity.

You can shrug about the Greens and UCU, hollowed out as they are becoming, but you can’t give up on the British Medical Association or the General Medical Council. Until then, it is only responsible to fight anti-Zionist boycotters – this involves fighting for your organisation’s democratic structures, which they seek to exploit and erode.

I would prefer to live my life away from organised politics – mainly because I am really bad at political organisation and also because I’m collegial and have no urge either to hold a position of power nor to work with or fight people who want this for themselves. And so much of what on the surface appears to be a political project turns out to be more of a vanity project. But there you go.

Meanwhile the people who do want to work for a Palestinian future are quietly building bridges and turning Israeli and Palestinian attention away from mutual blame and hatred and towards alternative degrees of compromise and accommodation. When somebody erupts in pain or anger, they don’t harangue them about somebody else’s pain or anger.

Update: I was less than forthcoming with links to evidence my generalisations about KKH above. But wrapped round a link to this post, Bob provides a number of further links to Keith Kahn Harris-ishness, so you can judge for yourself.

A bunch of us, and latterly our children, have been booking holiday cottages together for new year for a decade now. This year was probably the most scenic so far, in a former farm up on the hills to the north-east of Bryncrug. After a wet and unbelievably windy start to the week, the weather turned very cold and clear, then snowy, then clear again, transforming our valley in a matter of hours.

Matt and I finally made it to the top of Cadair Idris, our third attempt, this time in fairly deep snow and sheet ice near the summit.

On our way up: 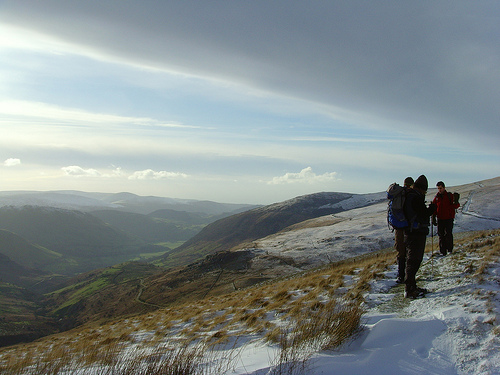 The summit, trig point just visible through the fog and snow: 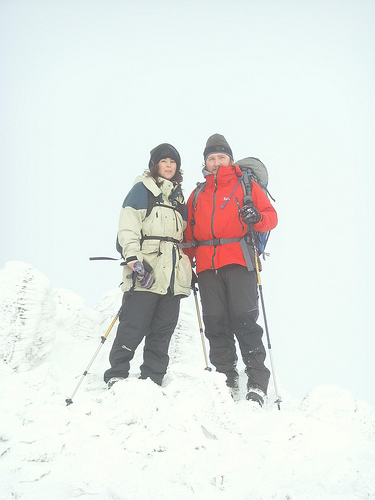 On our way down: 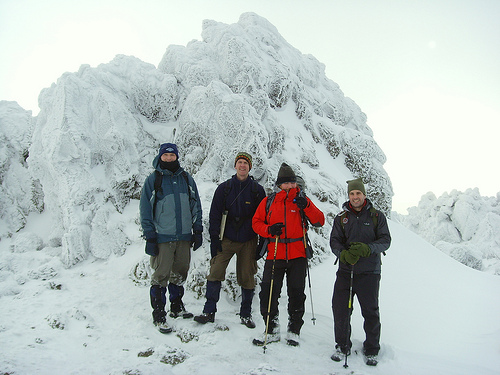 A few days later we walked to Dolgoch Falls: 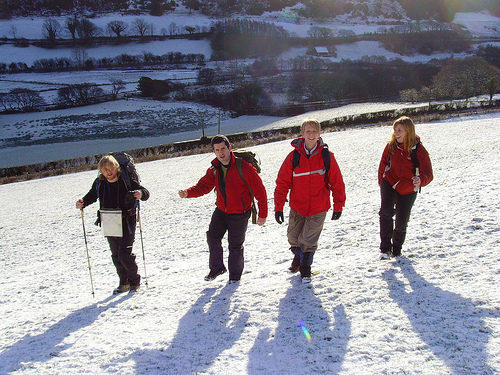 Met a snowstorm on the top of Mynydd Tan-y-Coed: 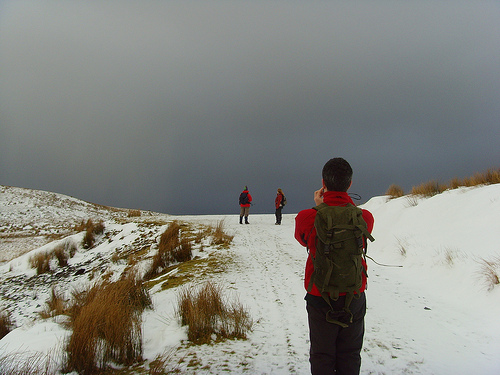 which was thankfully local and short-lived, giving us beautiful views seaward to the west : 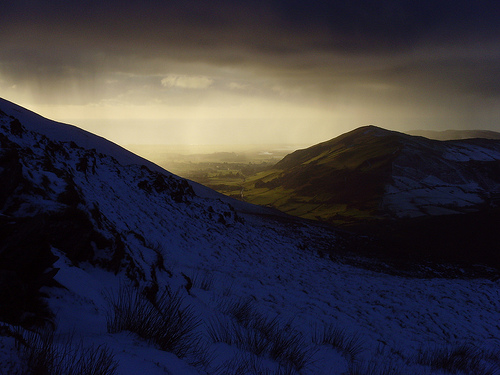 although finding our way down wasn’t so easy: 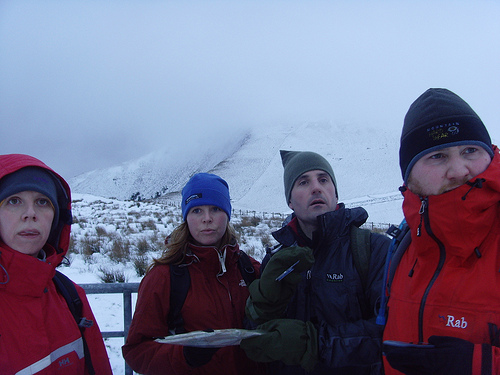 You can use what's on this blog if you follow its Creative Commons licence guidelines.

Go listen - London and beyond