Anna Hillman is an eagle eyed photographer who takes portraits of the determined little plants which sprout virtually unnoticed – until you start looking – from any conceivable cranny the concrete of South East London.

They are the kind of small determined spurts of life which are so common as to go unnamed – weeds, moss, lichen – but which through Anna’s lens become incredibly photogenic and soulful.

Look at this forthright little chap, casting his shadow among the wire grille’s. 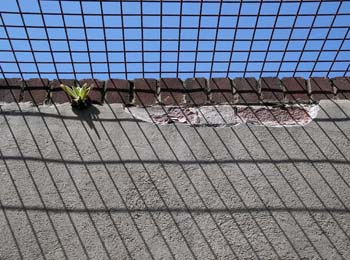 Look at these young scamps: 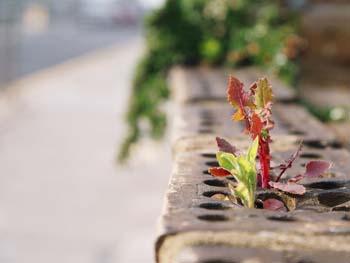 It’s hard not to get sentimental about these pictures – to be honest I don’t even try. Without them outside surfaces would be bleak and decaying – with them they become miniature landcapes. They make you wonder about the small accumulations of grot which sustain them – where do these tiny portions of topsoil come from?

I’m really chuffed to have bought a few of her pieces early because I probably won’t be able to afford her for much longer – she’s just won Environmentalist of the Year 2008 from Archant}London Environmental Awards.

If you want to see more, she and various other artists and photographers, designers, textile makers, mosaicists will be opening their studios at Trinity Buoy Wharf  on the evening of Wednesday 10th Dec 08, 6-10pm. Anna will be in Studio S, on the third floor of Container City 2. Trinity Buoy Wharf is an interesting place to visit in itself and can be reached on foot from Canning St (Jubilee Line and DLR) and East India Dock (DLR). I really recommend going to have a look.

1 thought on “Anna Hillman – Environmentalist of the Year”